Life has been pretty sad for this Moth-er of late. The weather has been obnoxious! Cold and wind. More cold and wind then thrust into extreme heat of over 42deg C. Thankfully, we've had a cool change so there's now more cold and wind!

Only a couple of nights so far this month have been suitable for putting the sheet up and they were pretty disasterous as the swarms of gnats made going anywhere near the sheet a bit of a nightmare. The moths also don't enjoy being constantly bombed by gnats. I have a couple of moth entries for January which are still awaiting correct identification.

Anyway, here are some "insects" that have come to the light so far this month! 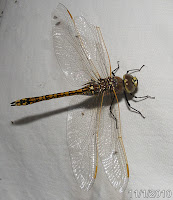 My first halfway decent Dragonfly shot! I'm no Odonata expert but I think this large Dragonfly might be the Australian Emporer, Hemianax papuensis.
Aeshnidae 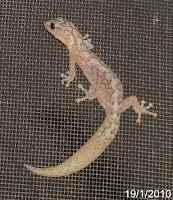 My Marbled Gecko was back in it's usual spot on the kitchen window screen. I was delighted to see it again because I was a bit suspicious my sighting in March last year might have been a once-off.
Posted by Junior Lepid at 3:19 pm

Love the Gecko!
No doubt it loves Moths.
That's a conflict of interest for you, surely?
Cheers
Denis

Hello Denis, yes it's sort of a conflict of interest but in this case, the gecko wins!

I've not seen a Marbled Gecko in the 30 years I've lived here - until last March. It was a wonderful find and I was really pleased to see it again, doing what it does best on the screen! At least it's not targeting the sheet yet! :-)