Hepialids can be quite difficult to correctly identify without the beneift of years of experience and in some cases, a microscope! I was unable to be of much use to Denis when he called for identification assistance recently, but I guess that is part and parcel of the mothing game! We are learning together.

Back to Oxycanus antipoda. My moth was approximately 3.5cm in length. I photographed the same moth at the same time last year although we hadn't had rain for about 5 days. It rained yesterday, 47.5mm to be exact, but I have photographed Hepialids this year without a sniff of rain for a considerable time, so it appears rain is not necessarily the trigger for Hepialids to emerge from underground.

The common name for this moth is the Oxycanus Grub and the larvae feed on grasses.

More Hepialid photographs can be seen at Moths of Great Western. 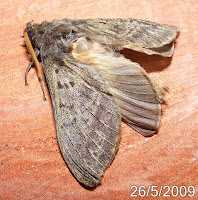